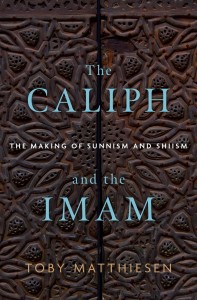 Illuminates with clarity and insight a centuries-old sectarian division that continues to shape events in the Middle East and around the world.

In 632, soon after the prophet Muhammad died, fights broke out among his followers as to who would succeed him. A small number of Muslims–who would become known as the Shia — believed only members of Muhammad’s family should lead. The majority, however–the Sunnis–insisted that the leader should be elected by the community’s elite. This initial dispute marks the origin of the Sunni-Shia split in Islam.

In The Caliph and the Imam Middle East scholar and expert Toby Matthiesen explores this hugely significant division from its origins to the present day. Moving chronologically, Matthiesen sheds light on how this initial divide has shaped and continues to influence current events in the Middle and Near East. His book spans from the 7th century to the present, and in particular focuses on one of the key moments in the conflict–the Saudi-Iranian divide, the source of so much conflict in the Middle East. Matthiesen emphasizes the period after the 1979 Iranian Revolution, which precipitated the first recent “hot” war in the rivalry, between Iran and Iraq, and he reflects on Sunni and Shia jihadists and their influence on the political landscape of the world today. Detailed, thorough, and illuminating, The Caliph and the Imam will become the standard text for readers looking for greater understanding of the region’s contemporary conflicts and their historical roots.