The Other Saudis: Shiism, Dissent and Sectarianism 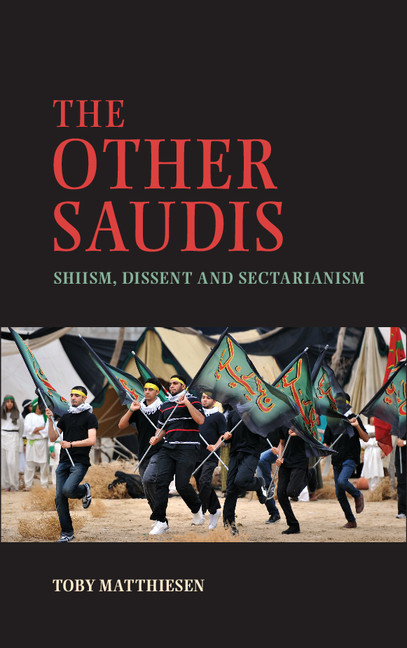 Toby Matthiesen traces the politics of the Shia in the Eastern Province of Saudi Arabia from the nineteenth century until the present day. This book outlines the difficult experiences of being Shia in a Wahhabi state, and casts new light on how the Shia have mobilised politically to change their position. Shia petitioned the rulers, joined secular opposition parties, and founded Islamist movements. Most Saudi Shia opposition activists profited from an amnesty in 1993 and subsequently found a place in civil society and the public sphere. But since 2011 a new Shia protest movement has again challenged the state. The Other Saudis shows how exclusionary state practices created an internal Other and how sectarian discrimination has strengthened Shia communal identities. The book is based on little-known Arabic sources, extensive fieldwork in Saudi Arabia, and interviews with key activists. Of immense geopolitical importance, the oil-rich Eastern Province is a crucial but little known factor in regional politics and Gulf security.

Order via Amazon or directly from Cambridge University Press

“An extremely powerful analysis of the Shia of Saudi Arabia. Matthiesen lucidly moves between the past and the present with great linguistic and analytical skills that demonstrate panoramic knowledge and in-depth understanding of one of the most complex minority situations in the Arab world. His thoughtful historical account is matched by his familiarity with wider contemporary regional contexts and domestic politics.”
Madawi Al-Rasheed, London School of Economics and Political Science

“Matthiesen skillfully fills in a large gap in the literature of Saudi Arabia as well as of modern Muslim politics. Drawing on an impressive range of sources, he expertly documents both the enduring power of the regime and portentous transformations in communal identity and authority. This detailed and thoughtful study of the Kingdom’s Shia will become the standard work on an increasingly important subject.”
James Piscatori, University of Durham

“Matthiesen’s book is based on an impressive work of data collection. It mixes the analysis of previously unexploited archival material with fieldwork to offer an insightful and compelling picture of Shiism in Saudi Arabia. It definitely fills a vacuum in our knowledge of contemporary Shiism.”
Laurence Louër, Institut d’Etudes Politiques, Paris

“This sweeping history of the Shiites of Saudi Arabia immediately becomes a definitive account of their politics and social organization. Drawing on wide-ranging interviews inside and outside of Saudi Arabia, along with a wealth of novel documentary sources and political publications, Matthiesen presents a compelling account of the evolving relations between the Shiite community and the Saudi state, and of the Shiite networks that cross the Gulf and the region.” – Marc Lynch, Washington Post/Monkey Cage

‘Utilizing a wide array of Arabic pamphlets and local historiographies collected in second-hand bookshops in Lebanon and around the Gulf, Matthiesen paints a complex portrait of the Shi’is of Saudi Arabia and traces how their interaction with state structures has shifted over time. The other Saudis is particularly strong on how the Iranian Revolution of 1979 sharpened sectarian identity politics in Saudi Arabia in its turbulent aftermath.’ Kristian Ulrichsen, International Affairs

“Matthiesen has widely researched this book in Saudi Arabia, the Middle East and the West. His footnotes and bibliography of books and articles in Arabic and Western languages are useful and extensive. It is an important text for understanding the Saudi Shias and sectarianism.” – Caroline Montagu, Asian Affairs

‘[This book] is helpful in understanding some of the current problems in Saudi Arabia, the leading regional ally of choice of the United States.’ – Cosmopolis

‘The academy has often been censured for its esoteric preoccupations and abstruse offerings. Still, there are occasional gems, and Toby Matthiesen’s The Other Saudis is clearly one of them. With this book, the author has managed to shed much light on an important subject that is not easily accessible: the predicament of the Shi’ites in a country that professes an intolerant branch of Sunnism. Matthiesen’s mastery of primary sources and keen eye for detail makes his account an indispensable work of historical scholarship. (…) The Other Saudis is an important, if not indispensable, guide to one of the least understood but most influential countries of the Middle East, a region that is coming apartin the midst of sectarian conflicts and civil wars.’ – Ray Takeyh, Survival

“The Other Saudis makes an original contribution to scholarship on the modern history and politics of Shi’a in Saudi Arabia and the Middle East and provides abundant evidence for further analytical work on sectarianism.”
David Commins, The American Historical Review

‘This book is particularly timely given the resurgent importance (rightly or wrongly) attached to sectarian politics throughout the region. Most importantly, it situates this sectarianism within the broader economic and political contexts of the Saudi kingdom, and explains its function and utility in the larger project of shaping Saudi national identity… there is little doubt that this is a valuable contribution to the field and required reading for all serious historians of the modern Middle East.’
Alexander Khaleeli, Journal of Shi’a Islamic Studies

“Matthiessen’s excellent volume is an objective historical analysis of the Twelver Shi’ah, largely in the Eastern Province, and to a much lesser extent … of the Ismā’īlīs in Najran.”
Anthony McRoy, The Muslim World Book Review

‘… Matthiesen provides an impressive analysis of primary documents that have never been studied before, some of which remain in private hands. His reconstruction of Shia history and self-understanding is nuanced and rich …’ Natana Delong-Bas, E-International Relations (www.e-ir.info)

‘Matthiesen’s book provides an extremely accessible and extensively researched history of the Shia minority in the modern Saudi kingdom. As such, it is an indispensable resource for anyone intending to understand the current sectarian dynamics in the Middle East, their historical background and their impact on Shia minorities on the Arab side of the Persian Gulf. In addition, the book makes an important contribution to understanding Shia minorities in the Arab Middle East which so far have remained understudied. (…) The Other Saudis is therefore a crucial read for academics working on the modern Middle East from various disciplinary backgrounds and for journalists, policy makers and other relevant stakeholders who engage in different ways with the region.’

Interviews about The Other Saudis

Read how I explain the book as seen from page 99

Podcast of book launch at the LSE, October 2015

For excerpts, table of contents and index see the CUP website